Opinion: There is no reason for most trainees to delve into programming principles or exercise and nutritional science.

Having been on the internet for twenty years and been part of more forums and communities than I can remember, I feel comfortable saying that Reddit, more than any other, seems to be a magnet for people who want to feel like they're smart and that they're being smart. I don't know why this is. I want to emphasize my use of the word feel there, because as anyone who has had some knob try to mic drop them with the name of a logical fallacy they found in that infographic from Imgur (you know the one) can tell you, it's usually less about actually being and more about the feeling.

For some people, feeling (and having others congratulate them for being) smart is very important to them. This is not entirely their fault, but it is a poisonous mindset that will frequently take their hand with a smile and a hug and then walk them directly into a pit. When they try to get into strength training or fitness, the sign over that pit is frequently "Doing Research".

Let's be clear: It's an important thing for there to be testing and understanding about the human body and its responses to various kinds of exercise through scientific study. It's important for there to be coaches with many years of experience with training people, trying things out, seeing what works and what doesn't, and building training methods from empirical evidence. Somebody should be "doing research". But that somebody is not you. For some people, it is a smart idea to blaze forward into the weeds, ingest a ton of information, and coalesce it into some kind of methodology or action plan. For you, that idea is stupid.

To illustrate why I think you're stupid for trying to be smart, here's an imperfect analogy.

Hearken yourself back to your childhood when your parents descended from on high and bestowed your very first set of Legos. Did the box contain a textbook on architecture, physics, or mechanical engineering? Did it contain a book on the concepts of building things out of Legos? Would you have known what to do with any of that if it did? Of course not.

If instead of the boxed set, your parents had dumped all the pieces onto the floor in front of your little drooling face, what would you have built out of it? Would you create the pizzeria your hungry plastic townspeople so desperately need? No. They would starve and die.

What did the box actually have in it? It had a booklet with pretty pictures that told you, step by step, how to build your pizzeria. Because, like most eight year olds, you don't know anything. But that's the wonderful thing about Legos - You can build what you want no matter what you know, because they always come with that little booklet. You can build your entire Lego Metropolis based entirely on following instructions.

This is an imperfect analogy. I don't want to hear about it from a voice that comes out of your nostrils.

The point here is that there's a pervasive fantasy on Reddit that the most intelligent way to get started with something you're inexperienced with is to do the following:


When you say it out loud, that sounds kind of stupid. But it's what new trainees do all the time because they never stop to think about what they're doing, and they don't realize that the real Step 1 of that process is this:


So I repeat: There is no reason for most trainees to delve into programming principles or exercise and nutritional science.

My experience through several years of observation has been that trying to be "smart" instead of just painting by numbers usually ends in one of two ways - getting completely lost in the weeds and overwhelmed with trying to build a Nirvana Routine out of PubMed articles and dozens of different training philosophies and not starting at all, or creating a nightmarish chimera that looks more like you used a dartboard than your brain.

What most trainees need to do is stop trying to be smart themselves and just pick any one of the hundreds of smart kids they can find and copy their homework.

Another imperfect analogy: I'm a software engineer. If every bug I fixed or feature I added was something I created entirely from scratch, I'd never deliver on time and I'd be fired. At my company, my job is to solve problems and deliver on goals - not to be innovative - and this is frequently a matter of copying how other people did the same or similar things to what I'm working on. When my company can't receive money from customers that want to give us money, there is no one at any level of management that will congratulate me for taking a day and a half to write my own solution if I could have fixed it in a few hours because I used Google to find out how other people have already solved the same problem. It's somebody's job to pioneer new technology, but it's not mine.

This is a hard thing to accept. School beats it into you over and over that using someone else's work instead of doing your own is cheating or the dreaded plagiarism. But this has done you a disservice, because in much of The Real World, repeating work that other, smarter people have already done isn't admirable - it's usually wasteful and stupid. "Reinventing the wheel" is a pejorative for a reason. The idea that you always need to DIY things is poison.

This whole thing is particularly for novices, but I really think it applies to most people in general.
You can get really, really far into your pursuit of strength training by just copying somebody else's plan and busting your ass at it. Find a reputable coach and follow their Lego instruction booklet. It doesn't even need to be something you empty your wallet for. There's free homework laying (lying? I should have copied somebody's English homework I guess) all over the place.

And ultimately, the real trap in this thought process is overestimating how much your specific plan matters - especially when you're just getting started. Strength training isn't math homework with one correct answer - it's an essay. Lots of people are saying lots of things that are different without being wrong. 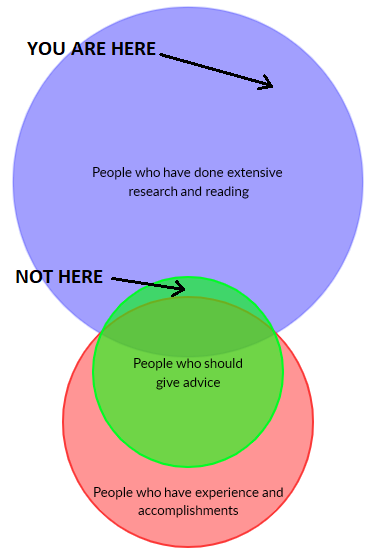